The Dangers of Mixing Cocaine and Alcohol

Cocaine is a powerful stimulant drug that is derived from the leaves of the coca plant, usually grown in South America. When processed, it frequently comes in a white powder form. It also comes in a rock crystal form that is usually called “crack.” People frequently abuse it for its euphoric and energizing effects. On its own, cocaine is a dangerous drug with a strong potential for addiction, withdrawal, overdose, and harmful health risks. However, mixing cocaine with alcohol can lead to even more serious side effects, including the possibility of death. Fortunately, treatment is available for an addiction to cocaine and alcohol. We can help you find rehab facilities in Dallas or elsewhere in Texas.

Risks of Mixing Cocaine and Alcohol

In 2019, about 2% of people ages 12 and up used cocaine – this equates to about 5.5 million people.2 Some people mix alcohol with cocaine to enhance its effects, reduce the unwanted effects of alcohol intoxication, and reduce the stimulant crash.3

The side effects of mixing cocaine and alcohol include:4,5

One study found that the combination of cocaine and alcohol can lead to a much higher risk of suicide, even higher than either substance taken on its own.6,7

Sometimes people drink alcohol to reduce the negative side effects of cocaine. This combination can have serious effects including an increase in violent thoughts and actions.3,8 It can also lead to a serious, potentially deadly, side effect–the production of coaethylene.3

Your vital organs must process whatever you put in your body. In the case of cocaine, your liver works to metabolize the cocaine. When alcohol is also present, it prevents the liver from doing its job properly. Instead, it releases a compound called cocaethylene.

While cocaethylene may temporarily enhance the high you feel from the cocaine and alcohol, it is extremely poisonous and can have devastating effects on your body, including:9 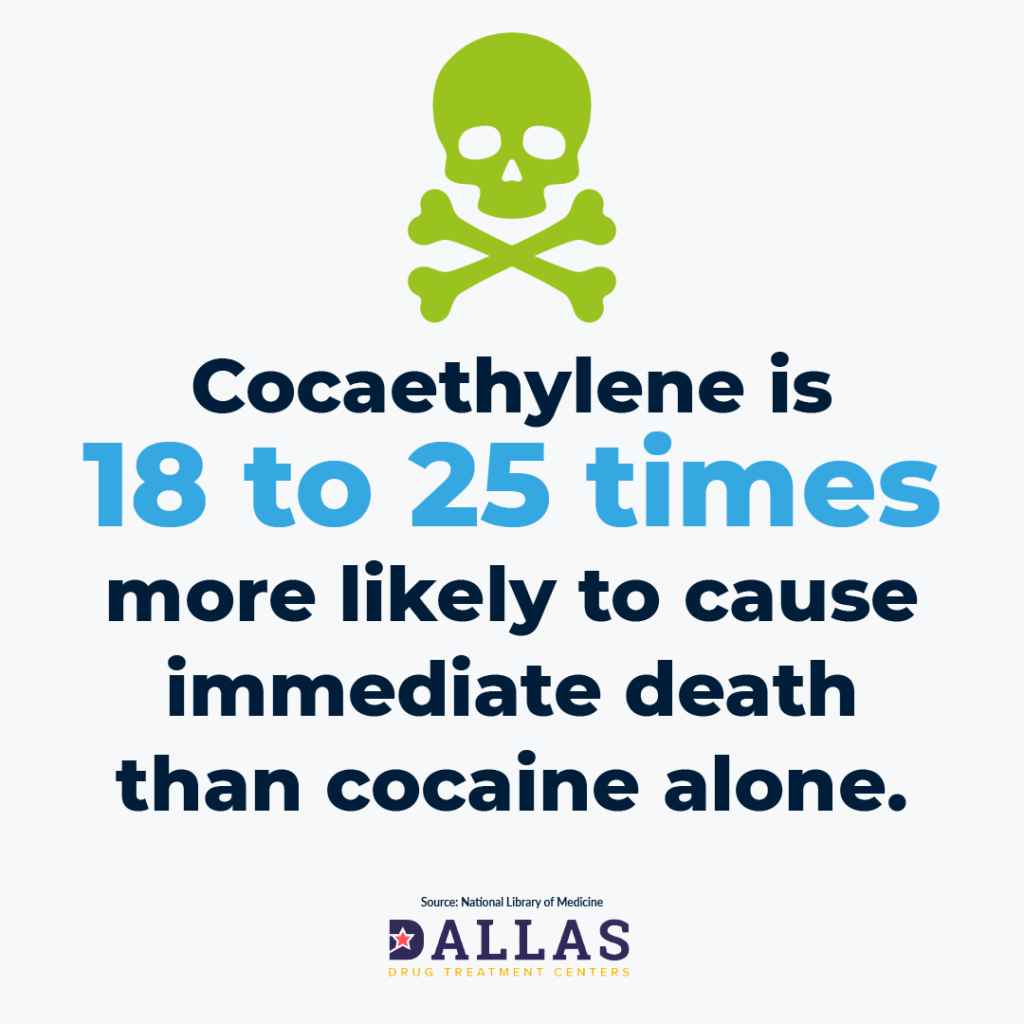 When present in your body, cocaethylene is 18 to 25 times more likely to cause immediate death than cocaine alone. It is also associated with liver damage, seizures, and compromising the immune system.10

Overdose on Cocaine and Alcohol

With the combined negative effects of cocaine and alcohol, you are more likely to experience a fatal overdose. An overdose can be either intentional or accidental and can happen any time these two substances are combined.

These are some of the signs of a cocaine and alcohol overdose:4,11

If you or someone you know is experiencing symptoms of an overdose, you should immediately call 911. There is no specific drug that can counteract a cocaine and alcohol overdose. While you wait for emergency help, you can attempt the following:

Once in medical care, doctors will treat the patient for any overdose symptoms.

Long-term cocaine use can damage the neurotransmission process for hormones like dopamine. Over time, your brain will stop reacting to your natural reward pathways and you will begin to experience more negative moods while not taking cocaine.12 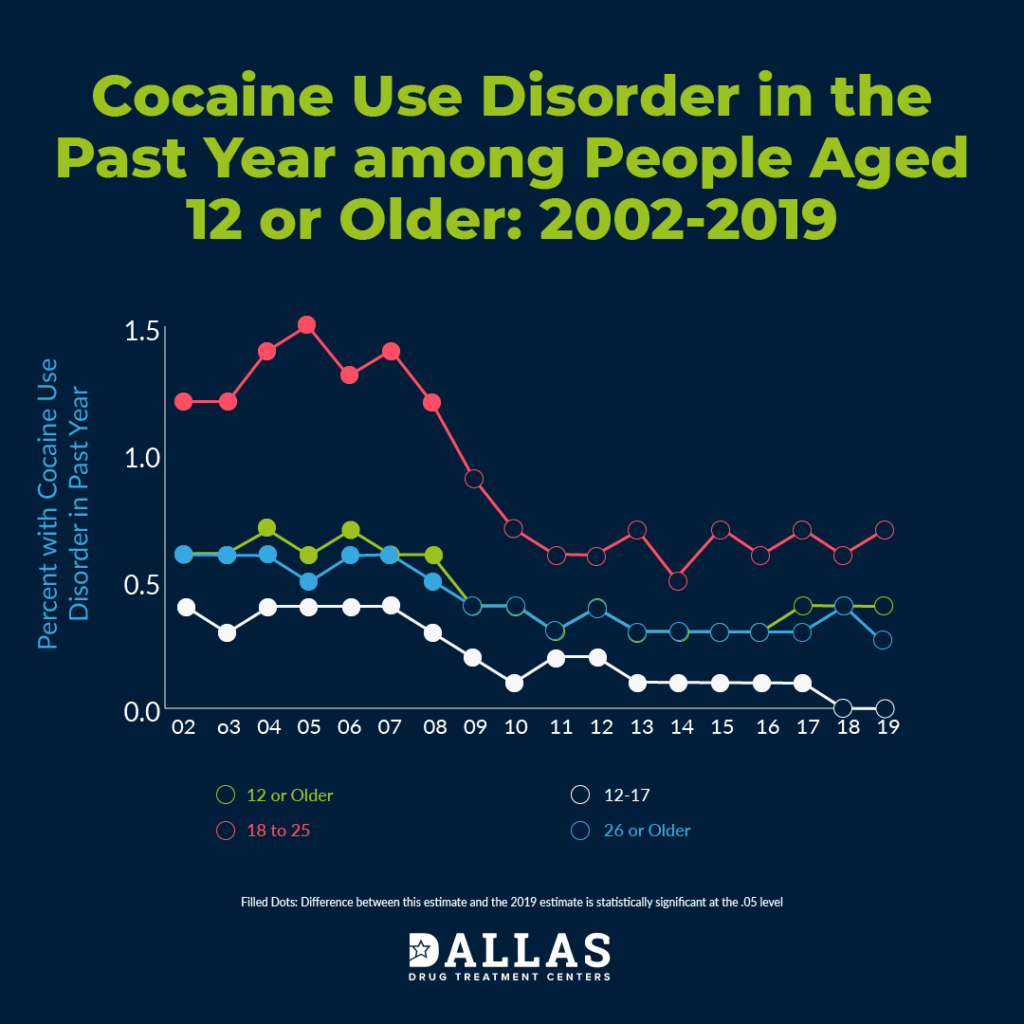 With continued use, your body will develop a tolerance to cocaine and alcohol, and you will need to ingest more of it more often to experience the same pleasurable effects. Your body may also become more sensitive to cocaine, which can lead to more negative side effects with smaller doses.12 These opposing effects lead to a higher risk of overdose.

Long-term cocaine use can increase your risk of the following:12

Additionally, various methods of administration cause different long-term effects. For example, snorting cocaine can cause some harmful effects, such as:5

Smoking crack cocaine can lead to lung damage and asthma.12

Injecting cocaine can increase your risk of:5

Alcohol also has its own long-term health risks, including:13

Studies have shown, that if a person has a long-term alcohol addiction, they are more vulnerable to becoming addicted to cocaine. This is because alcohol affects the nucleus accumbens in the brain, which is known as the “reward circuit” in the brain.14

These are some of the most common cocaine withdrawal symptoms:15

After you stop drinking alcohol, you may experience the following alcohol withdrawal symptoms:16

Treatment for Cocaine and Alcohol Abuse

If you recognize that you or someone you care about is addicted to cocaine and alcohol, there is a path to recovery. To avoid some of the more severe withdrawal symptoms, it is best to enter a medical detox program in which you receive 24/7 medical care, oversight, and supervision. This will keep you safe and comfortable in case you experience severe withdrawal symptoms.

Once you have detoxed, you will need a polydrug addiction treatment program—typically, in an inpatient setting that provides you with around-the-clock treatment, away from your everyday using environment. Drug and alcohol rehab facilities can work with you through your cocaine and alcohol addictions and create a customized treatment plan that focuses on your needs.

A cocaine and alcohol addiction treatment program may use a combination of treatment methods, including:

There are currently no FDA-approved medications used to treat addiction to cocaine. However, there are some medications available for alcohol use disorder as part of a medication-assisted treatment program. These alcohol addiction treatment medications include acamprosate, disulfiram, and naltrexone.17

It is important to have a support system you can count on to help prevent a relapse. However, it is crucial to remember that even if you do relapse, that does not mean you have failed in your recovery. Many people going through treatment for substance abuse disorders experience a relapse.18

If you are ready to make a change in your life, call our helpline at 1-800-429-7690 to get started. Our treatment support specialists are ready to help you find the best treatment program for cocaine and alcohol addiction.

Does Taking Cocaine While Drunk Sober You Up?

No, using cocaine will not sober you up if you have consumed alcohol. While the cocaine may make you feel like you are less intoxicated, you are still very impaired. Cocaine can slow down the metabolism of alcohol, making its effects last longer.

What Are the Signs of a Cocaine and Alcohol Overdose?

If you are experiencing an overdose of cocaine and alcohol, you may have difficulty breathing, feel extremely agitated, or even have a seizure.11 It is important to call 911 at the first sign of overdose.

What Happens When You Mix Cocaine and Alcohol?

When combined, cocaine and alcohol metabolize in the liver to produce cocaethylene. This toxic byproduct is a potentially deadly substance that can lead to heart attack, stroke, liver damage, seizures, brain bleeding, and sudden death.8

Can I Get Treatment for Addiction to Cocaine and Alcohol?

There are numerous treatment options available for cocaine and alcohol addictions. You will need to go through a medical detox and then a polydrug treatment program. A treatment program will likely include therapy along with some medications to help with cravings.

How Do Cocaine and Alcohol Affect My Brain?

Cocaine and alcohol can have long-term effects on your brain’s reward system. These substances make it harder for your brain to respond effectively to your natural chemical rewards and instead rely on the dopamine released from the effects of the cocaine and alcohol.

Sarah Mahan has been writing professionally since 2008, with a focus on medical writing and the healthcare industry. She has a bachelor’s degree in English and lives in Ohio with her husband, three daughters, and two dogs.

What Are The Benefits of Quitting Alcohol for a Month?

With 2022 just beginning, many people are starting to get into their New Year’s resolutions. Quitting or reducing alcohol consumption is, by far, one of the

Mental resilience, psychological resilience, “mental toughness” — however you want to call it — is usually defined as a person’s ability to remain mentally fit in

6 Things You Should Know About Cannabis and Pregnancy

In a potentially serious trend, more American women than ever before are taking cannabis during pregnancy, with the rate of use among pregnant women more than

Thanks to a better understanding of mental health, we now know much more about anxiety disorders and substance use disorder than we did in previous generations.